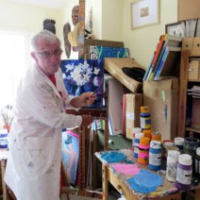 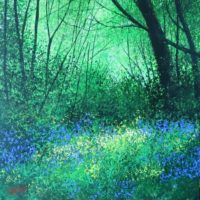 Terry Wood was born in Tottenham, North London, and grew up in Potters Bar, Hertfordshire. He now lives in Stotfold, Hertfordshire, with his wife Jan, that is as passionate about his work as he is.

Terry discovered painting at an early age and every spare moment was found drawing, sketching or painting. When he was a teenager, he painted his first family portrait of his Mother, Father and Brother, sitting in their front room, it was entered into the Royal Academy of Arts Exhibition.

Terry studied at St. Albans School of Art, where he completed a
BA-Hons. Degree in 2D Design. He then worked as a Commercial Artist for many years, but his passion was always for painting.

He works in acrylics, watercolour, mixed media, and likes to explore other mediums, such as pastels, gouache and pen and ink.

As for his subject matter, Terry takes his inspiration from many sources. He has travelled extensively, and his sketchbook is usually a digital camera, which he finds very useful, especially when time is in short supply.

His talent enables him to paint the most spectacular landscapes, vibrant abstracts, figurative studies and everything else that inspires him. His art is reasonably priced and would enhance any wall in your home!