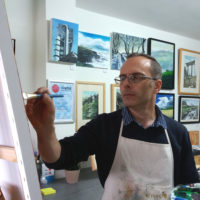 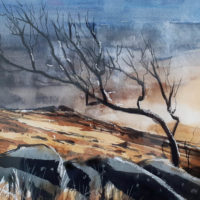 Born in Halifax, West Yorkshire, Mike grew up surrounded by the rugged moorlands and deep dales of the South Pennines - the landscape of the Brontës and Ted Hughes. Subconsciously his eye has been coloured ever since by its legacy of grit-stone buildings and stark beauty.

Mike's influences are diverse and include a love of Gainsborough’s pastoral scenes, John Martin’s Biblical epics and Ashley Jackson’s atmospheric skies, fused with an enthusiasm for film, all of which filter through to his brush work. Trained as a scenic designer, Mike looks to bring out the drama in a scene.

Mike rarely paints a location exactly as he finds it, preferring to alter weather, lighting or viewpoint to that which he believes best enhances its character and reflects his response to it. He's also fascinated by the passage of time and his paintings often depict ancient landscapes which humans have interacted with and built on but are slowly being reclaimed by nature.

Mike demonstrates and holds workshops throughout the region and currently teaches at The Letchworth Settlement. He also features regularly in Leisure Painter Magazine. He is a member of Herts Visual Arts and the Society of All Artists.