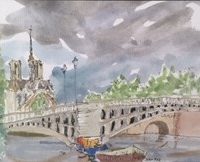 John exhibits in The Royal Academy & Royal Society of Miniature Painters & in galleries around the World. His 'Sketch Book of the World' was first published in 1994. JOHN RAE artist and architect.

I was fortunate. The sculpture master was Willi Soukop, later to become professor at The Royal Academy schools. The art master was Lyons-Wilson whose enthusiastic support for my eleven year old painting of the Exeter blitz was a formative event. We remained great friends for the rest of his life and I gave a talk on him to The Art Workers Guild and was co-author of a book about him. His classes were not on art history, and certainly not on criticism, they were on art appreciation. With two such teachers, and quite unexpectedly, I found myself at the forefront of modern European art. Jean Miro and Paul Klee were gods. Johannes Itten came soon after.

I studied at University College London - Bartlett School of Architecture and Slade School of Art - and then worked for Maxwell Fry on, mainly, West African and Indian projects. I then won the competition for the development of Dumbarton.

Art and Architecture have gone side-by-side. Throughout the sixties I became Principal Lecturer in the Hornsey College of Art, and then returned to Architecture teaching, first, at The Architectural Association, and then back up Gower Street to UCL. I also travelled a lot teaching in Dublin, Glasgow, Sweden, USA, Canada, New Zealand, Australia and Nigeria. My ‘Sketch Book of the World’ was published in 1994 and is available on Amazon etc.

The paintings have covered abstraction and buildings and landscapes, and also miniatures. Partly as a result of travel they have been exhibited around the world as well as in many galleries in the UK, including The Royal Academy and also in Petworth House where 180 paintings of Early English Parish Churches were shown as a part of The National Trust Centenary.