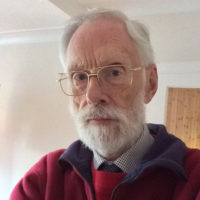 John, from the North of England, was for 43 years a commercial artist, during time which he played many roles and produced many forms of art. Mostly, however, his work related to preparation for print with type casting, heavy duty lettering in the days before Letraset, model making, photography, cartooning . . . the list goes on. For the last thirteen years of his career he worked steadily at doing everything on the Mac at a time of great change in the advertising industry.

Leaving it all behind in 2000 he felt it time to become a 'proper' artist and took up watercolours. After a few successful years with this medium he branched into pastels followed by acrylics and finally, his greatest love, oils.

He says that the most important part of what he does is the making of art in all forms. he would be quite content to just store all his work up in the attic but he finds a lot of pleasure in exhibiting his work, selling some and storing the unsold in that attic. Sales help pay for what is an expensive hobby but are not the main reason for his efforts.

Mostly John works from his own sketches and his own photographs made for the eventual purpose of picture making. His computer remains important even if only for storing the 27,000 or more photographs which he has amassed over the last 60+ years! He will not use other's pictures, postcards, calendar pages etc as reference for his paintings as he feels that one must have seen and been in the presence of subject matter even if only briefly. Nor should one be borrowing another person's expertise and colouring and compositional skills without express