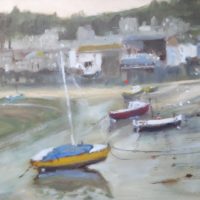 A self taught artist working in both oil and watercolour. In his younger years he travelled the world extensively as an apprentice and deck officer in the Merchant Navy, which probably accounts for his preference in painting marine and coastal scenes. He has recently had paintings accepted for exhibition at the Mall Galleries by the Royal Society of Marine Artists. Influenced by the Impressionists and post Impressionists he strives to achieve paintings with atmosphere as depicted by light, shadow and weather.