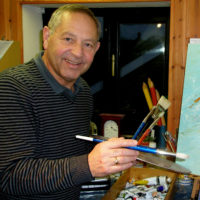 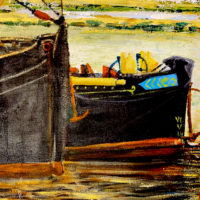 At school, George Meliniotis was likely to be daydreaming or drawing, rather than concentrating on the set classroom tasks. His imagination would take him into distant and obscure worlds, where light and dark merged. Colours fused into each other, to cover all objects and figures with continuous colour fluidity. In these strange worlds, form, shape and order did not exist in the normal way. It was all in the imagination. He did not know it at the time, but this imagination is what drives art. He also did not know, that he was and still is, synaesthesic, allowing him to visualise the world around him in his special way. Expression of this however, is very personal, with some difficulty in conveying to others. This has made him somewhat conservative and traditional, in much of his artwork, although this is now changing, resulting in experimentation with a variety of ways to express his thoughts.

He started painting more seriously, when he was about ten years old, when he chose to have a set of poster paints as a present. His confidence was boosted when in his early teens, he won first prize for his age group, in an all Birmingham painting competition, sponsored by the then Milk Marketing Board, which required candidates to paint a dairy scene. He did not understand at the time, why a dairy scene was important to the school children of industrial Birmingham, but maybe its purpose was intended to enable inner city pupils to explore new ground. The prizes were awarded at what was then the Odeon, just by the Birmingham Bull Ring! Maybe there is some meaning there?

As he continued with his education, he chose a scientific career, with art becoming a leisure activity. After semi-retirement, during the last ten or so years, art has been a major activity, articipating in Hertfordshire and Cambridgeshire Open Studios and other local exhibitions as well as holding four solo exhibitions.